PART III: KEY ISSUES AND OPPORTUNITIES WHEN RETURNING TO ISRAEL 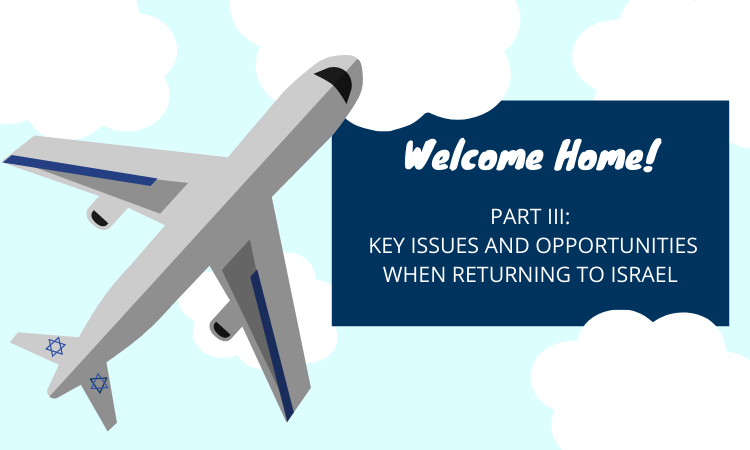 One of the most significant issues facing both Israelis returning to Israel from time spent working in the U.S. as well as for Americans making Aliyah regards the various U.S. pension and retirement savings accounts that they funded when they worked in the U.S.

It is important to note that these savings plans generally have significant penalties for early withdrawal, so do not plan to withdraw funds from them until you reach retirement age. If you became a U.S. citizen while you were in the U.S., you should consider if you can continue to contribute to these plans due to their tax-free growth.

The good news about these plans is that for U.S. purposes, the funds continue to grow tax-free. Israel generally takes the same approach and does not tax the growth in plans such as SEP, IRA, Roth IRA, and 401(k). However, it is essential to consult with an Israeli CPA to confirm that your specific plan will not be taxed by Israel on its growth as well as to receive updates on Israeli tax law regarding your plan.

When you reach retirement age, there will be required minimum distributions that you will need to start taking from these plans. If you are not a U.S. citizen (or green card holder) and you reside in Israel, then you report these distributions on form 1040NR. However, the U.S. – Israel tax treaty allows this to be exempt from U.S. tax if taken over at least three years. Therefore, if you take this treaty position on your filing of Form 1040NR, you will not pay the U.S tax on this income. If you are a U.S. citizen, then you are subject to U.S. tax on these distributions. However, the U.S. does give Israel the right of first taxation and will therefore provide a credit for Israeli taxes paid on this income.

For an oleh chadash or long term returning resident (toshav chozer vatik) Israel taxes these distributions under section 9(3) of the Israeli code as if they were the sole income item on their U.S. return. Therefore, you pay the Israeli tax according to this calculation and get a credit on your U.S. return. If you are an oleh chadash or a toshav chozer vatik and you are in your ten year holiday, you would not pay Israeli tax on distributions during this holiday period. However, if you are a U.S. citizen, you would still be subject to U.S. tax during this period.

In summary, this is a classic example of an income item that needs the attention of a CPA that is fluent in the U.S. – Israel tax treaty as well as both U.S. and Israeli taxation. This will allow you to make sure you pay taxes first to the proper authority and utilize proper planning to lower your overall tax on this income.

Catch up here on Part I and Part II of this series.