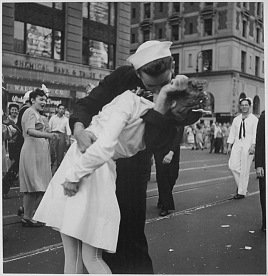 It was reported recently that George Mendonsa, the sailor who was in the iconic photo kissing a nurse, Greta Zimmer Friedman, in Times Square on V-J Day, died at the age of 95.

Even before he died, I had thought a lot about this picture, particularly when the #MeToo movement started in 2017, and how such an image would be received by the public today. For decades this picture was celebrated for the uninhibited joy it expressed marking the end of World War II. The onlookers in the photograph smile at the initiative taken by the sailor as if a groom is kissing the bride at the end of a wedding ceremony. I suspect if this scene were to take place today, Mr. Mendonsa would be universally condemned by the media and subpoenaed by the police.  Ms. Friedman would be featured on every cable news channel and become a media “celeb” for a few days.

I belong to a group called “I grew up in Chicago (South Shore)”, a page where nostalgia is shared about growing up in my neighborhood during the 1960’s. Recently a well-known Chicago media personality, with whom I attended school, reported that he was attending the reopening of the recently restored Avalon Theater from my old neighborhood.

This was one of the main places for kids to see movies back in the day. I recall my father taking me to see my first film there, “House on the Haunted Hill”, in which an actual skeleton flew out from behind the stage. I also went to see “Godzilla versus King Kong” by myself at age 8 when I could not find any friends to accompany me and the movie was about to be replaced by a newer film. The reporting of the restoration unleashed a wave of response from group members who described that attending movie matinees at the Avalon Theater were some of the happiest times of their childhood. The recollections of independence of going to the movies with friends, combined with the popcorn, candy and run-ins with the ushers, were joyful memories sustained for over 50 years. I began to think how the current generation of pre-teens will be impacted from watching most of their movies on small screens without the benefit of friends around. Will they have the same pleasurable recollections of their childhood 50 years from now? What memories will bring a smile to their faces, like my contemporaries experienced watching movies at the Avalon Theater?

Recently I was able to follow in the footsteps of my children and crisscross southern Chile and Argentina. After covering over 200 kilometers on various hikes, my wife and I and were happy to arrive safely in Bariloche, Argentina and be attendees at the southernmost Jewish community in the world (latitude 41 degrees below the equator), Beit Chabad. The local Rabbi is a charming young man from Petah Tikvah who warmly hosts Jews from all over the world, although 95% of his clientele are Israeli backpackers. On Shabbat afternoon, the Rabbi gave a class on the “Tanya,” the central literary work of Chabad. In light of the fact that Shabbat only ends at 9:15PM in late February, we decided to walk back to the Chabad House and attend the class. At some point during the class, the discussion turned to how social norms have changed so much in recent years. The Rabbi spoke of how on one hand Judaism must respond to societal changes, while on the other hand, traditional Judaism needs to stick to its core values.

The Rabbi’s discussion led me to think about Times Square and the Avalon Theater and how attitudes have changed so much over the last two generations. Are things that made people happy years ago no longer acceptable? Are ways that we entertained ourselves in the past no longer appropriate for the future? As Bob Dylan, sang many years ago, “The Times They are a Changin”, and apparently it not just the “Times” but so are we, and our way of looking at the world. As the Chinese say, “May we be privileged to live in interesting times” and may we be able to live happily with the changes around us.