Where have you gone, Joe DiMaggio…? 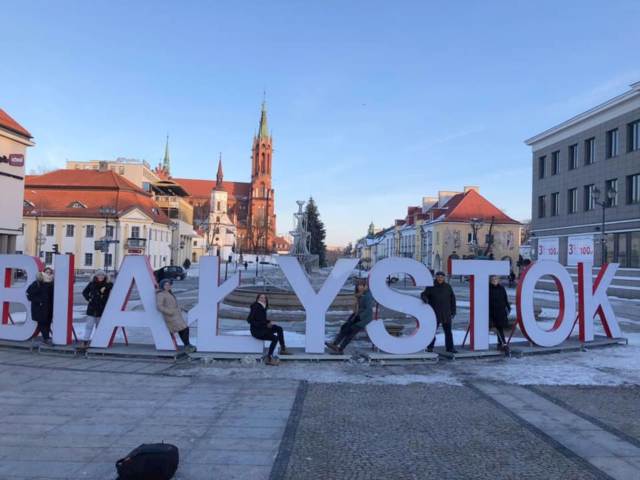 13 Feb Where have you gone, Joe DiMaggio…?

…. Jolting Joe has left and gone away.

The words above come from one of the most well-known songs of modern times.  These lyrics came to mind during a 2 hour plus train ride from Bialystok to Warsaw, Poland.

The train sped through Northeast Poland on a wintery January day last month. After delivering an enjoyable workshop at a Hi-Tech incubator called Tehnopol in Tallin, Estonia, my wife and I traveled home to Israel via Warsaw. I am not a big fan of Recep Tayyip Erdoğan and did not want to go via Istanbul. Booking this route reminded me that when my grandfather left Poland in 1921, he received his visa to the U.S. from the embassy in Warsaw, and set out on a train to Trieste, Italy with his parents and siblings.

Looking at a map, I saw that the city of Bialystok was a 2 hour plus train ride from Warsaw and my grandfather’s home town, Grodek, (pronounced in Yiddish “Horodok” and meaning literally “small town”) was 30km from Bialystok. A cousin who authored our family tree knew of a Polish guide who had written a book about Jewish life in the Bialystok region of Poland. Thanks to the internet, arrangements were made and after a day in Warsaw (my first time there as well), I set out on a 6AM train to Bialystok with my wife and 5 daughters who flew into Warsaw for a 2-day historical journey.

Our guide Tomek met us at the Bialystok train station and took us on a short van ride to Grodek. We arrived at the City Hall/community center and were surprisingly greeted by the mayor (population 3,000) who presented us with gifts including a keychain (not a key) to the city. I then asked the delegation to join my family and myself on the snowy banks of the Suprasl River. I gave a short speech about how my ancestors would go down to the river bank on Tisha b’Av and reenact the first line of Psalm 137, “By the rivers of Babylon, there we sat and wept when we remembered Zion”. Concluding my remarks on a happy note, I directed my family in singing two of our favorite songs from the Passover Haggadah, with unique tunes that came from this very town. We were then taken on a short walking tour of the town center and to the home of an 87 year-old former Polish diplomat, a lifelong Grodek resident, to hear about what life was like there before the war.

As we returned to the van, I started to feel what was missing on this special trip There was not one sign that this town was once 70 percent Jewish. There was not one remnant of a synagogue, Bet Midrash, or cemetery. There were no birth records of any of my relatives, no recollections of any of the family surnames and hardly anyone alive that recalled that Jews ever lived in this town. Where was my uncle’s turpentine factory that was taken over by the Nazis? Where was the jail that had imprisoned my great grandfather for smuggling cattle during the Soviet regime? Were some of the circa early 20th century homes we passed, in fact, the house where, during the First World War, German soldiers entered on Shabbat and dragged my great-grandfather out to the fields to harvest wheat? I was not about to receive answers to any of the above questions, or any of my other questions. Yes, we had arrived at a place where my ancestors lived for hundreds of years; I experienced the nature, noted some of the old architecture and breathed the air, but there was so much that was missing. We could only use our imaginations to think what might have been. If not for the Nazi regime, we might have been visiting cousins who could have shown us all the places that no longer exist, but alas, that is not the reality we live in.

My musings led me to think about the lyrics from Mrs. Robinson, “Where have you gone Joe Dimaggio… Jolting Joe has left and gone away”. Just like none of us can buy a ticket to watch Joe Dimaggio hit a ball at Yankee Stadium, neither can I see or feel the ghosts of my ancestors who thrived in Grodek, Poland. Although, my late relatives are long gone, having not left a trace, my grandfather who left as a young man in 1921 did pass several tales down to me. I am grateful for those memories and now when I think of those stories, I will be able to picture in my mind the trees and the river bank and smells that no one in my family had experienced in almost 100 years. As an added bonus, I was able to bring these family stories to life and pass them on to my children, who will surely pass it on to the next generation. Mission accomplished.